Legislator Wishes To Make Mail-In Ballot Permanent In The State

Legislator Wishes To Make Mail-In Ballot Permanent In The State

Nevada expanded universal mail-in ballot in 2020’s second quarter. Many voting rights advocates and Democratic Party members praised that Nevada move, but Republicans did not like it. Regardless, it could be permanent in the state of Nevada.

Assemblyman Jason Frierson may introduce a draft law akin to a measure passed in 2020’s epidemic period to deliver ballots by mail to every active registered voter. The main distinction is that the draft law would be applicable to every future election.

As for Jason Frierson, depriving the voters of that option would be inconsistent with the independent spirit of the state.

The legislation is likely to address the vote counting and reporting speeds, but specific details are ironed out, said the assemblyman.

As for him, it is a prime concern to educate people on how safe mail-in voting is. He underlined the importance of considering that some individuals are misinformed with false details regarding fraudulent activity.

Mail-in voting was among the controversial matters in the 2020 US Presidential Election. Back then, Democratic Party members argued that it expanded the opportunity to vote and protected voters in the epidemic period. At the same time, Republican Party members made unsubstantiated claims regarding its part in voter fraud.

As for election officials from the state, including Nevada Secretary of State namely Barbara Cegavske, the evidence of voter fraud in widespread form was non-existent.

Soon after its passing, there was criticism against the original draft law from Republicans in Nevada and elsewhere in the United States of America. No Republican legislator voted in favor of it, whereas Donald Trump said on Twitter that there should be ‘immediate litigation’ against that bill.

The litigation happened from the Republicans as a way to stop that measure, but to no avail. It started a series of unsuccessful legal proceedings targeted at Nevada’s expanded measures of voting.

Nevada’s Republican Party members still oppose the voting system, citing that it plays a part in a lack of trust in the US election processes.

A greater number of Democrats cast their votes by mail as compared to their Republican counterparts last year.

As for Assemblywoman Robin Titus, the universal voting system plays a part in the political division, plus it would damage the civic trust even more in Nevada.

The Democracy Docket website features an article from Frierson where the assemblyman said that Nevada had “historic gains in the fight against voter suppression”.

He also said that we would ensure secure, convenient and safe options of casting the ballots for eligible Nevada residents. 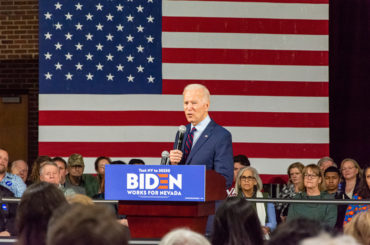